Africa is constantly in the news and for all the wrong reasons. Although trillions of dollars have been poured into the continent, one calamity after another makes the headlines. At the same time there are calls for yet more aid amounting to further billions. Not only are improvements absent, the disasters assume ever greater proportions while constraints are making themselves felt within the donor nations. It is time to examine the issue in a realistic and objective light.

The Otoom model identifies a system in terms of its dynamic parameters. Characteristics such as size, complexity, flow of information, and the capacity for cluster-building determine its eventual status.

Focusing firstly on the mind, the number of neurons, their connectivity, the transfer of signals among them, and the emergence of functional clusters as ideations and concepts give rise to the cognitive potential of the individual.

Functionalities can be scaled up or down. Just as in an individual's mind the neurons, etc, contribute to the overall status, within the wider panorama of society their equivalents there are the members of a society, their social interactions, the transfer of information, and the ability to form groups. How productive the result turns out to be depends on the general quality of those parameters.

Human activity systems are complex per se. Hence inevitable shortfalls here or there will be compensated for once an entire society across substantial timelines is considered. An entire economy, a confluence of a variety of subsystems, observed along a considerable time span, therefore provides an informative picture of how the total system is able to perform under varying circumstances.

A further phenomenon of such systems are conceptual intersections. The name refers to the transference of a material and/or cognitive kind (infrastructure, money; information, concepts) from one system to another where both systems differ from each other in terms of their inherent status. For example, data from a high-complexity region will be compacted within its relatively low-complexity counterpart, or money from the former will be spent less productively in the latter. (For an example of what this means in the case of Europe see The social Europe: a formal view).

Over the past four decades Africa has been the recipient of considerable amounts of aid. A great variety of organisations have sprung up that offer assistance across many fields, from financial resources to the creation of infrastructure. Their scope can be seen from the example of USAid. Contributions come from individual donations as is the case with ASAP Africa, they can be in the form of medical assistance as provided by AfricaAid for instance, or they are managed on a large scale as can be gleaned from the OECD country list.

And yet, the results are found wanting on a continuous basis. Every now and then there are calls for a new approach, "new partnerships", to somehow affect an outcome that so far has proven elusive. Usually the problems are seen as shortfalls of money, which prompted China for example in 2006 to pledge to double its aid. So did Japan in the same year, announcing to provide US$60 million for Africa.

Still there are calls for more. In 2008 the UN estimated another $6 billion are needed to implement emergency intervention measures to mitigate the food crisis.

In the same year the Africa Progress Panel declared that the rich nations fell short by $40 billion on their pledged amounts based on current plans.

Certain hints that money is not everything come from Bob Geldof, a prominent advocate for African aid. Aid isn't the answer, he said, and examples from other demographics are offered showing how an initial assistance can be used to improve standards. That China may pull one per cent of its population out of extreme poverty is seen as a "staggering statistic", while acknowledging that in Africa the transition to balanced economies never happened. Similar comments, comparing Africa with Asia and South America, come from Delft University. Africa does not have the same "entrepreneurial spirit".

Despite the infusion of $450 billion in aid, as William Easterly from New York University pointed out in 2005, nothing much has changed. Richard Dowden, Director of the Royal African Society, puts the figure at nearly a trillion dollars of aid since independence in the 1960s.

No wonder critics start to appear. In a Spiegel article from 2005 the writers question the usefulness of pumping vast amounts of money into an area that does not translate into tangible results. Yearly payments of some $26 billion are mentioned. And so on and so on.

In an article about natural disasters, complex emergencies and epidemics during the past decade around the world between 1995 and 2004, Spiegel, Le, Ververs and Salama point out that epidemics are not necessarily a function of complex emergencies. While more research needs to be done, they write, the "often-repeated assertion that epidemics, especially large-scale epidemics, commonly occur following large-scale natural disasters" does not seem to hold. Using Otoom's perspective the idea does suggest itself that epidemics are largely the product of a societal infrastructure rather than the given result of disasters.

A report by the International Council for Science identifies several factors contributing to Africa's high vulnerability to disasters, including the high rate of population growth, food insecurity, high levels of poverty, inappropriate use of natural resources, and failures of policy and institutional frameworks.

Population growth features prominently. Considering the dynamics from a system's perspective, the inflow of aid produces artificial results when the overall status of the recipient does not allow for a comprehensive improvement across all areas of society. While population numbers increase, the general capacity to make use of such numbers in order to ramp up the society's ability to develop productively stays behind.

The following chart uses OECD data for African nations, positing the amounts of official development assistance (ODA) against the rise and fall of population numbers for the years 2004, 2005, and 2006.

Based on OECD data. For the complete table see OECD-Aid-Africa.zip

The parallelism is striking. Throughout those years an increase or decrease in aid was matched by a commensurate movement in population. At the same time, as the reports show, not only was the need for ongoing assistance not reduced, it grew. In total, population numbers actually increased.

The effect can be seen through the following two maps provided by the United Nations Environment Programme Global Resource Information Database, one showing the population density in 1960 (left), the other in the year 2000.

A map from the SASI Group (University of Sheffield) and Mark Newman (University of Michigan) drawing the world proportionally according to people killed by disasters beyond their local capacity between 1974 and 2004 has Africa as the most affected region. 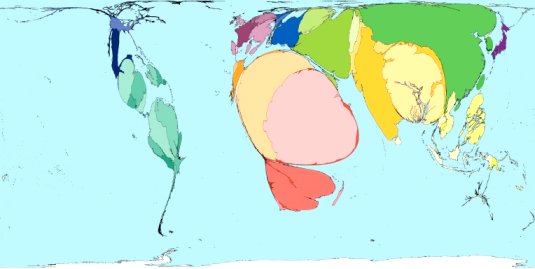 Hence the number of people matters, particularly when they remain the passive recipients of aid and nothing else. Imagine if someone in 1960 had been endowed with the foresight all those data available now make possible.

Imagine further such a person had focused on Africa and out of utter callousness decided to make not 100,000 people suffer, not a million, but tens of millions. That person did not need to wage war, but would have been able to proceed with seemingly highly altruistic motives by suggesting to supply an ongoing stream of aid for the next forty years or so. The effect, as we know now, is the same.

Add the emerging constraints suffered by the rich nations of this world, whether from peak oil, climate change, or internal social problems (ageing populations and child welfare come to mind), and the prospect of continuing assistance as we have seen so far becomes rather bleak.

And when those billions of dollars start to dry up - what then, Africa?

One of the major aspects of the Otoom model is the high degree of interdependency among a system's participating elements. Viewing an ecosystem at any scale essentially as a system allows one to sidestep possible entanglements due to personal subjectivity (after all, nature does not care about one's personal preferences).

For example, how human demographics have interacted with their surrounding fauna is largely a function of the former's position on the evolutionary ladder. At first the balance of power was more or less evenly divided, often in favour of the animal. During this stage both, humans and animals, lived side-by-side, accompanied by a sometimes considerable reverence towards the animal as well as destruction coming from either.

At the next stage of evolution animals were made use of (where possible) and so have become a part of the human economy in terms of survival.

Later still human society, although finding use in certain animals, could also afford to keep them as pets, in other words for the purpose of personal satisfaction and entertainment.

Transposing such relationships onto the higher functional scale away from animals towards human demographics entirely, we find a certain parallelism.

With some demographics evolving more quickly, subsequent encounters with others resulted in the taking of slaves in the latter, to be made part of the former's economic system.

Further development led to an abandonment of slavery, to be replaced by what could be seen as an altruistic form of engagement through the provision of aid and sustenance without any immediate benefit to the giver except for a sense of personal satisfaction. On that larger scale political gains fall into that same category.

Today all three stages are on display, represented by the particular players' respective sophistication. Inter-tribal rivalry, from social competition to genocide; the use of relatively lower-level demographics by others for the latter's economic benefit with the former being effectively slaves; and the supply of aid by industrialised nations to dysfunctional demographics which does not help the latter but acts as a source of personal and/or political satisfaction for the former ('personal' as in - feeling good about donating to the poor, 'political' as in - demonstrating one's nation as a responsible member of the global community).

The type of scenario eventuating from such interactions serves as an identifier of the giver as well as the recipient. If the recipients become slaves, then this says something not only about them but also about the giver since they allowed the situation to develop along those lines. If the recipients merely use the resources directed towards them, then that result identifies the giver as someone who can afford the largesse and it marks the recipient as a source of satisfaction for the giver but not much else. If both sides benefit they are on equal footing in terms of their particular development.

Overall, the results are a function of the participating systems' innate capacity and resourcefulness.