The Great Barrier Reef: it really is great

Diplomats from the 21-nation World Heritage committee have been invited recently to tour Australia's Great Barrier Reef. Prompted by environmentalists from around the world the committee had already issued its first warning 12 years ago that the Reef would be put on the list of endangered sites. Concerned by the negative impact such a decision would mean for the country the federal government showed the delegates some of the areas, including islands and certain ports in question [1].

What the visitors saw came as a surprise. The beauty was still there, and the ports were smaller than they had imagined.

Peter Gash, the owner of Lady Elliot Island Eco Resort mentioned the comments made by the ambassadors of Philippines, Serbia, Poland, Peru, Vietnam, Japan and Estonia: "Most said: 'We did not think this sort of beauty still existed'".

From a cognitive perspective there is a reason why the alarm bells had started ringing. Here is one example.

One of the most contested developments is Abbot Point Port, a deep-water coal terminal about 25 km north-west of Bowen. The construction of its facilities and associated activities such as dredging have long been criticised by environmentalists who claim it 'destroys the Barrier Reef'.

Note the phraseology: Abbot Point does not destroy the beach, or its particular coast line, or simply the waters there, it does all that to 'the Barrier Reef'.

From these words conceptualisations form. Just as a tree and its shade, or a car and its interior conjoin one item with another, whatever characteristics are shared between them are considered to be mutually on par. Therefore the tree has a certain size and so does its shade, and the car comes with a dimension that is also assumed to apply to the interior.

Consider the sentence, "That big oak tree hides the country". If this sounds silly then it does so because it is.

Back to Abbot Point. To get some idea of the distances involved, first a satellite view of the reef's major section where the approximate distance following the diagonal is 1200 km. This is only a portion, the entire reef is about two thousand kilometres long. Move the mouse over the 400 km and the 220 km texts below the image to zoom in for those distances.

The red arrow points to Abbot Point Port, the location of the coal terminal. Note that even at the 220 km zoom-in the town of Bowen 25 km south-east is barely discernible. Even the mighty oak does not hide a country, nor can that port be compared with the whole Great Barrier Reef (and there are many countries measuring far less than 2000 km). 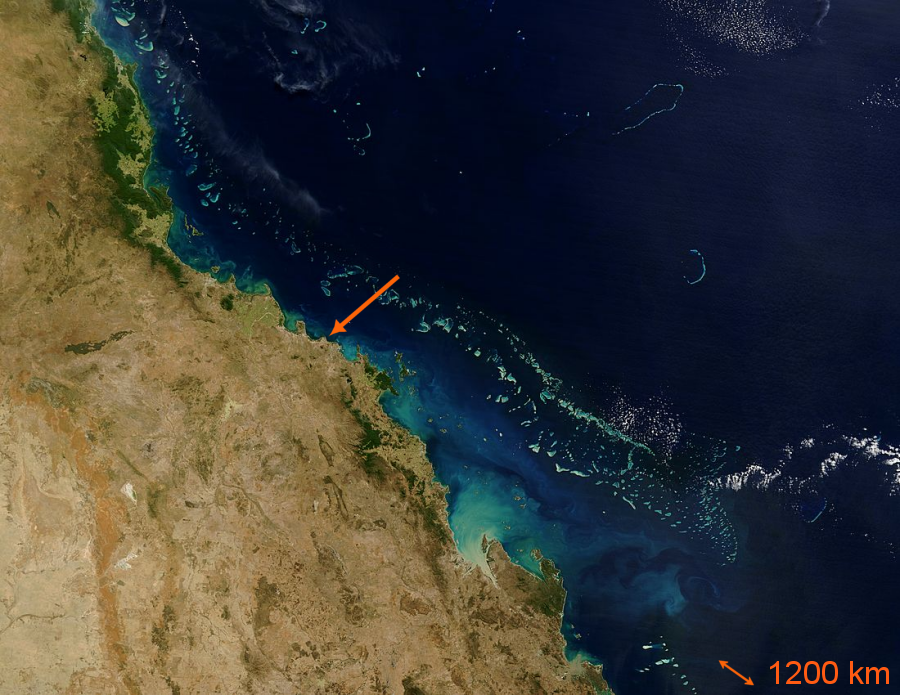 The images come from NASA - Visible Earth - The Great Barrier Reef of Australia.

What this means when flying, travelling by car, or walking:

Putting the geographical distances in context makes one appreciate just how large the entire area is. To attach the actual meaning behind the words "Barrier Reef" to what "Abbot Point" stands for would be bordering on the hysterical unless another agenda is involved to begin with.

Genuine environmental concerns should not be dismissed, but creating a conceptualisation using inappropriate contexts does not serve the concerns, it undermines them.

There is an associated aspect. Due to the sheer convenience of using motorised transport many travellers through Australia's outback do not appreciate what 200, 100, even 30 km of distance really mean if covered by foot. The conceptualisation of a distance experienced by car is not the same when it has to be managed on foot. As a consequence many die after only several hours of walking through fifty degree heat and something like ten percent humidity because their car had broken down.

Thought associations reasonable in one context can be disastrous when applied to another. In the case of Abbot Point and the Barrier Reef the ignorance of arm-chair activists has the potential to affect Australia's reputation.