When it comes to complex, dynamic systems there are certain criteria which determine a system's success.

What 'success' means depends on its nature, its internal operations, its interaction with the wider environment, and the specific challenges it faces, which in themselves are a function of what it does and what outside factors are able to exert an influence and to what degree. A fishpond deals with different issues compared to a forest, although there are no clear demarcation lines.

The World Economic Forum has just released its Global Competitiveness Report 2013-2014, and what it says about a nation's competitiveness is especially pertinent to complex, dynamic systems (148 economies were surveyed).

One of the major functional components in such systems is the feedback loop, connecting both internal and external functional states with each other. This leads to a high degree of interdependence among the subsystems, so much so that each part should never be considered in isolation.

Here are six quotes from the Report that underline the significance of the phenomenon:

"Particularly important will be the ability of economies to create new value-added products, processes, and business models through innovation. Going forward, this means that the traditional distinction between countries being "developed" or "developing" will become less relevant and we will instead differentiate among countries based on whether they are "innovation rich" or "innovation poor." It is therefore vital that leaders from business, government, and civil society work collaboratively to create enabling environments to foster innovation and, in particular, to create appropriate educational systems." (p. xiii)

"This year's Report features a record number of 148 economies, and thus continues to be the most comprehensive assessment of its kind. It contains a detailed profile for each of the economies included in the study, as well as an extensive section of data tables with global rankings covering over 100 indicators." (p. xiii)

"Although we report the results of the 12 pillars of competitiveness separately, it is important to keep in mind that they are not independent: they tend to reinforce each other, and a weakness in one area often has a negative impact in others. For example, a strong innovation capacity (pillar 12) will be very difficult to achieve without a healthy, well-educated and trained workforce (pillars 4 and 5) that is adept at absorbing new technologies (pillar 9), and without sufficient financing (pillar 8) for R&D or an efficient goods market that makes it possible to take new innovations to market (pillar 6)." (p. 9)

"While all of the pillars described above will matter to a certain extent for all economies, it is clear that they will affect them in different ways: the best way for Cambodia to improve its competitiveness is not the same as the best way for France to do so." (p. 9)

"The relationship between demography and environmental/social sustainability is extremely intricate. Rapidly growing populations might be a source of environmental stress, leading to greenhouse gas emissions, high rates of soil erosion, and the extinction of species. If rapid population growth is not accompanied by environmental management, it can give rise to tensions between groups for the control of scarce resources and can therefore be a source of further social instability, creating a vicious circle."
(p. 60)

As can be seen, the authors emphasise the phenomenon's importance on several occasions and provide a set of tables featuring the ranking of countries in terms of the criteria used. A complex series of calculations is employed to correlate the results for the tables, one of the reasons being the respective position of countries along their evolutionary timelines.

The following diagram from the Report illustrates the main categories identified as being crucial to the overall competitiveness ranking (the "twelve pillars"): 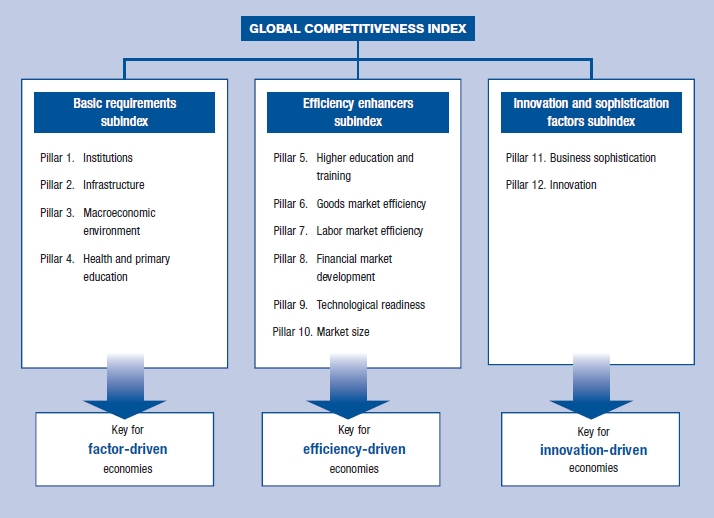 The "twelve pillars" making up the competitiveness index.

The first five places went to Switzerland, Singapore, Finland, Germany, and the United States, with Chad coming last. Australia is in 21st position.

Since many factors contribute to the final result there are 118 tables, ranking the 148 countries in terms of these particular factors. Below are excerpts from each, showing which came first, then Australia, and the last. Please refer to the Report's table headers for the precise meaning of the criteria.

It is to the credit of the Report's authors that factors were tested which enable the analyst to meaningfully compare and delineate from one type to another. For example, consider the entry "Hiring and firing practices" in the table above. Hong Kong received the highest score, Venezuela came last, and Australia's ranking is 137. A score of '7' stands for "extremely flexible" and '1' for "heavily impeded by regulations" (p. 490). In other words, high marks can be interpreted as low job security, and being at the bottom of the list means it is very hard for an employer to fire staff. Since Australia ranks 137th out of 148 and Venezuela came last, with the latter coming last in so many other areas as well (it has an overall ranking of 134 (p. 15)) the inference could be drawn that Australia's competitiveness is comparable to that of Venezuela's. Yet its 21st rank tells us this clearly not so.

Indicators referring to such factors as GDP per capita (Australia: 5), judicial independence (16), efficacy of corporate boards (7), inflation (1), secondary education enrolment rate (1), number of procedures required to start a business (3), soundness of banks (9), etc, speak of a relatively sound general infrastructure. That is to say, if an employer has difficulty dismissing someone, the chances are the employee might be given the chance to up skill. For that to happen the labour force needs to have the necessary potential which in the wider sense relies on educational standards and more personal options coming from a safer environment through greater stability. Since more training makes for a better work force still, the overall standard is raised: competitiveness improves.

On the other hand, a low-skilled work force will continue to be employed, the business suffers in a rigid environment and the options for improvement are stymied: competitiveness suffers.

Such feedback loops are a hallmark of complex, dynamic systems. Their subsystems are intricately linked so that a change in one is capable of affecting its functional neighbours, that is other modules which have a functional relationship with each other.

For that reason a tendency by some politicians to superficially modify a single circumstance - usually accompanied by spending considerable sums of tax payers' money - without considering its wider interdependency and possibly addressing some other instead - in the end far more effective one - leads not only to wastage but can make matters worse.

Most material on this website deals with the more fundamental, and hence general, aspects in the context of interacting functionalities which in their aggregate form determine the ultimate validity of their host system.

This Report represents the equivalent in the context of economic human activity systems and how they can be analysed according to their respective situatedness under the auspices of competitiveness.

On the global scale of humanity this is a most important characteristic defining us all. As such it points to the world of the future.