See the Manual for more details about what the program does and why.

Nature is one huge complex dynamic system. CauseF is an interactive program to show how such systems behave. Input by the user results in changes in behaviour, but often not what they would expect.

In CauseF the user can interact with a system via three modules: with the characteristics of squares in a grid (Grid module), with balls moving around a table (Spheres module), or with 'planets' as they orbit around a centre, the 'sun' (Planets module). The respective inputs affect changes in the inherent nature of the elements; the squares in the grid, the balls on the table, or the planets in a virtual solar system. Although the changes are applied in a discrete manner (the values are real enough), what happens as a result overall is subject to the mutual influences between all the elements (ie, the squares in the Grid, the balls in Spheres, the globes in the Planets).

In fact, the first insight that there are systems which do not behave in a linear fashion comes from Henri Poincaré who in the 19th century studied the movement of planets, thereby contributing substantially to celestial mechanics. CauseF allows the user to observe the changing orbits of virtual planets as they are influenced by the force fields of the sun and the planets themselves. If the orbits are rendered as paths the patterns are reminiscent of Lorenz attractor plots.

In space planetary systems (similar to our own solar system) are not unusual. Exoplanets even larger than our gas giants Saturn and Jupiter have been found, sometimes orbiting close to the sun (there was a time when it was assumed only smaller planets orbit a star as closely as in our solar system). In CauseF certain conditions cause large planets to form which in turn can orbit very close to the star (although such conditions only tend to emerge after several minutes if at all, see the Manual > Planets).

Nonlinearity is everywhere. There are even economists who begin to recognise the complex nature of their field as Steve Keen pointed out (S Keen, Debunking Economics, The Naked Emperor of the Social Sciences, p. 246, Zed Books, London, 2004).

For further detail see the Manual. Or simply run the program and see for yourself, using the tool tips.

Runs now on 64-bit systems.
Added tool tips to just about everything.
Streamlined menus.
All operations are launched from Settings.

Spheres:
Made group selections available for all groups.
Old group sets can be copied to new sets.
Added sound.

Planets:
Input to planets restricted to selected groups if so desired.
Planets can be removed either singly or several at once.
A planet can be turned into a 'star' and back again to the planet.
Fast saves allow the capture to file of the planets' movements and positions at that moment.
When loading from a fast-save file the movements can either start immediately or from the original state at start-up.
Fast-save file names can be set beforehand, with their consecutive number added automatically at each fast-save.
The width of the planets' paths can be changed in real time.
Added sound. 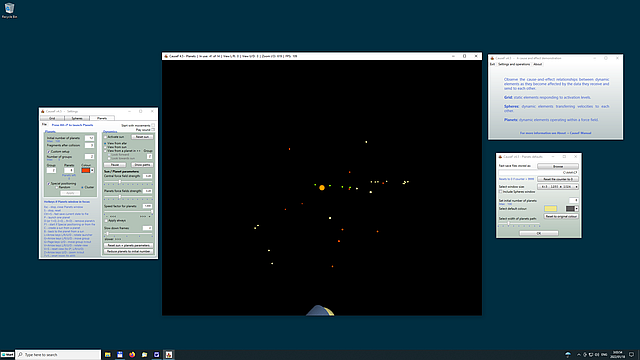 Deployment of (clockwise, l. to r.), the Settings window for Planets, Planets window with 2 groups (red, green) plus additional planets and a fragmentation burst on the right, Main window, and the Options window for planets defaults. Click on the image to view it at the 2560 x 1440 resolution.