To better understand how the concept of functionality can be applied take the following examples. The first relates to meteorology. The images come from the Australian Bureau of Meteorology website.

Below is a weather chart of the Australian continent, dated 24 Aug 2007 0600 UTC. Notice the high pressure system in the south-eastern corner. 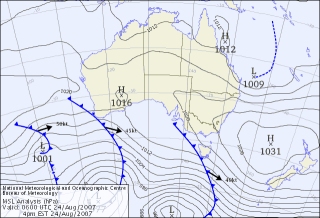 In the southern hemisphere air streams out of areas of high pressure in an anti-clockwise fashion, and moves into areas of low pressure in a clock-wise direction.

Now consider the four corresponding satellite images taken around the same time one after the other.

In case your browser does not load animated gifs here are the four images:

The massive cloud band has been generated by moist air coming in from the sea. Comparing the four images we see that the mass of clouds seems to move from west to east, exactly opposite to what we would expect in a High!

In fact, that band does not 'move' at all, but is the result of the atmospheric conditions as they exist over that time frame. Those conditions are changing such that at the respective altitude the dew point at which condensation forms has moved, but not the clouds as such. In other words, in image 1 the moisture content of the air was sufficiently high further inland for clouds to form there, in image 2 the condensation occurred closer to the coast, in image 3 it occurred further eastward still, and so on.

Condensation is due to a number of factors, such as air pressure, temperature, relative humidity, dust particles, the upward droughts caused by the sun's radiation, and the topography of the surface beneath.

These conditions can be circumscribed by a certain functionality exhibited by a given parcel of air, whether that be a bubble generated over a city or a much larger air mass moving over a coast line.

If one were to stand on the ground around that area and observe the clouds overhead, a superficial observation would have the clouds moving towards the coast, but in fact they don't. It is only the underlying conditions that travel in this direction, in other words the air mass' functionality.

This example shows how considering events in terms of their functionality provides a perspective much closer to reality.

The next example refers to violence in society. The Queensland Government decided to replace drinking glasses with plastic cups in hotels and bars to curb the incidence of glassing (source: Courier Mail, 26 Nov 09, "A glassless society"). Since plastic is less easily smashed the potential for causing injury is reduced. Although the government has a certain point, the measure does not stem violence as such. Its policy is based on an object-oriented perspective, since removing the object (ie, glasses) is deemed to mitigate violent behaviour by certain patrons.

Viewed under the perspective of functionality however, any measure would target the psychological make-up of offenders, regardless of the kind of object available at the time.

Thirdly, there exists a type of reformer who is concerned about greed and power play in society and therefore wants to abolish money. While it is true that money can be used as a tool in the service of greed and power it is nevertheless an object, used by a particular type of functionality situated within human activity systems. Merely getting rid of money does not prevent a person from abandoning their need for satisfying their greed or hunger for power. Money can be replaced by status, goods, relationships, and so on. Hence the absence of money does not solve anything. A more realistic approach would be to concentrate on the type of functionality that produces the destructive effects from corruption, obsessive desire and lack of empathy.

Finally, here is an example of transposing the ISO 9001 Quality Management System into functional sets under the Otoom mind model.